Virginia Liddle had a career change later in life when she was looking for something different after breeding ultra-fine wool and training dressage horses all her adult life. She joined Home Nursing Group as an AIN in 2009 and says the best part of the job are the fascinating people she meets; clients who have lived ordinary, extraordinary lives and have lessons to pass on. 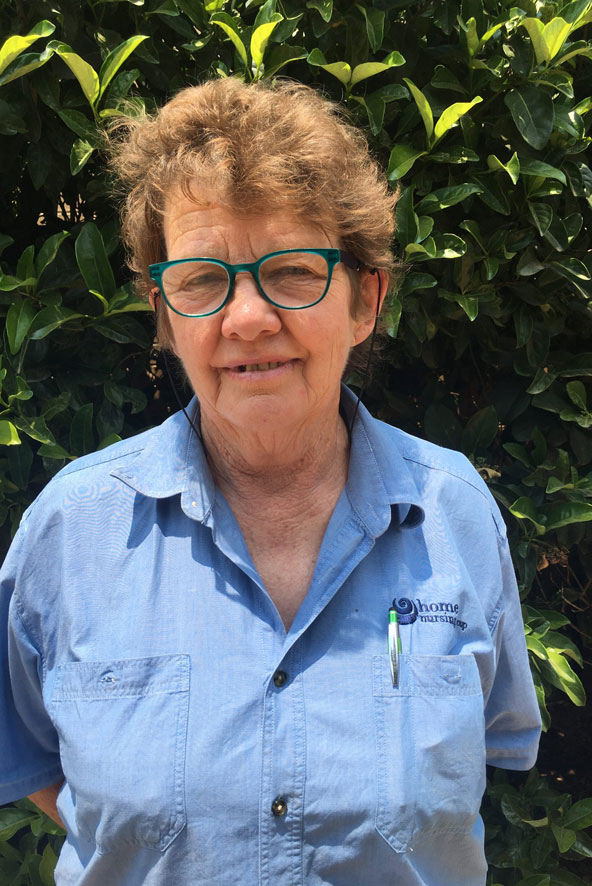 Virginia Liddle grew up in Warwick, Queensland. A self-described country kid, she was mad about horses and sheep as a little girl and that passion has stayed with her right up to this day. She desperately wanted to be a vet but was told it wasn’t a suitable profession for a girl – so she focused on what she loved; riding horses and breeding sheep. First competing in camp drafting, she moved to Walcha when she was married and decided to try dressage when she had her kids. This passion grew into a profession. While Virginia grew renowned ultra-fine wool, she also rode and trained dressage horses, working as an equestrian coach.  An accomplished dressage rider, she’s competed at a national level up to Grand Prix, the highest level attainable.

Virginia works as an Assistant in Nursing (AIN) for Home Nursing Group’s Armidale branch, having made the decision for a career change a year before coming across the group. “In 2009, Armidale Home Nursing cared for my parents,” she says. “I was looking for a different lifestyle and a change from being an equestrian coach. I knew someone working for Armidale Home Nursing (what is now Home Nursing Group) so I decided to give it a go.” She says her background working with livestock was a surprisingly perfect launch pad for her career change. “When you’re dealing with sheep, cattle and horses, you become very observant,” she says. “This really helps me in my day to day work. I can spot the little details and know if something isn’t quite right, or if one of my clients isn’t themselves.”

Virginia’s tasks vary day to day and client to client. “I help with everything, from domestic duties and making sure their homes are neat and tidy, to those who need help with their personal care and showering, to simply observing that they’re ok and having a chat and sometimes taking them shopping,” she says. “A huge part that I get feedback from the clients is that you can often be their line of communication with the outside world. That you can come in and talk to them and treat them as the intelligent humans they are and treat them with the value they have.”

For the committed AIN, it’s a job that’s appealing to those with plenty of empathy and compassion. “I love meeting the variety of people and hearing their interesting life experiences,” she says. “It’s an honour to be able to care for them in their later years. I’ve met some absolutely amazing people; from an ex-spit fire pilot from World War Two who is one of the last six left in the world, to a lady who used to run the first computer at the university, to somebody who went all through the Rhodesia/Zimbabwe revolution as a white person and their take on it all. Even people who have had very humble lives and their stories; women who were widowed very young and how they survived with their children when they didn’t have the backup that people might have today, in a time that husbands worked and women stayed at home. Just remarkable stories.”

Virginia believes that the ability to age at home is of huge value to the community, surrounded by treasured possessions and home routines mastered over the decades. She loves that Home Nursing Group gives people the option to do so, whilst remaining safe and comfortable. “I feel it is most important for people to have the option to stay in their own homes, with familiar surroundings and many memories,” she says. “I see how well it works for many and the fact that pets can also be involved and remain at home with an elderly person is beautiful. I think it’s one of the most wonderful things, to know someone will come in and help you.”