Marjorie Martin has been on hand for an enormous number of people through some of the most trying times of their lives, as a founding member and telephone Crisis Supporter for Lifeline in Port Macquarie. Now, nearing her tenth decade, it’s time for others to support her, with Home Nursing Group (HNG) stepping in to help Marjorie stay comfortably at home. 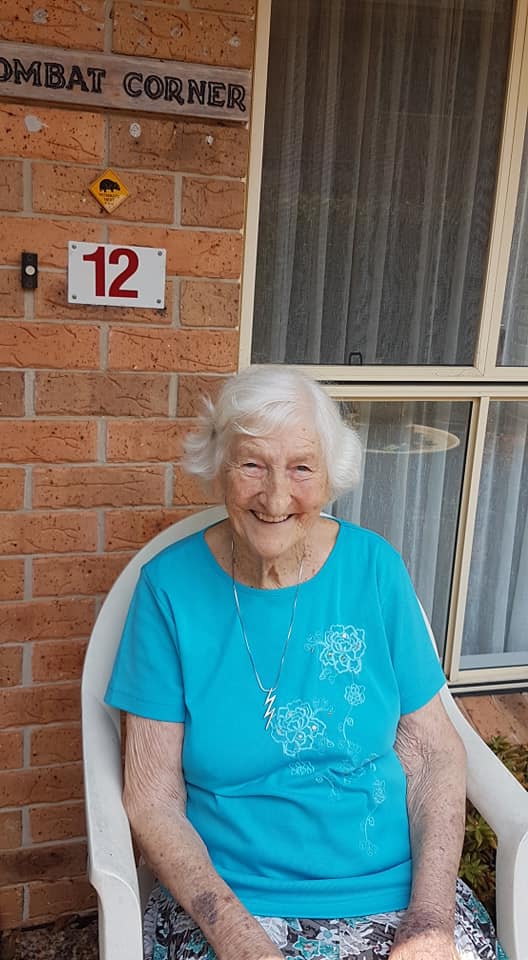 Marjorie Martin has the voice of a much younger woman. With her chipper tone and quick mind, you quickly get the sense of the powerhouse she was when she was younger. Now, with her 90th birthday approaching in just four months, her life’s pace has slowed somewhat, but she’s still quick off the mark when posed with a question. “It is an achievement I suppose,” she laughs when I congratulate her on her impending milestone birthday. “I have all my eggs in my head, I haven’t lost anything.”

My phone call has interrupted her routine; she was just about to wash up her dishes after her morning visit from her Home Nursing Group staff member. “I’m so busy with visitors, it’s hard to get anything done,” she says. She first contacted HNG in 2011, after they popped a card in her letterbox where she lives in a retirement village in Port Macquarie. “At that stage I didn’t need help but I knew they were coming to Port Macquarie and I wanted to know what services they were offering when I needed them,” she says. “I’d given my car up and I wasn’t sure at that stage, but two years later I asked them for help cleaning.” While Marjorie’s mind fizzes with buoyancy, her body has let her down a little. After a nasty fall last year and several since, Marjorie now has her HNG helpers visit up to three times a day. “Everyone comes to me as I can’t walk very far these days,” she says. “They come in and shower me in the morning, get me dressed and get me right for the day. The cleaner comes once a week, and someone comes in the afternoon to get my tea ready for me. Lite ‘n Easy deliver my main meals once a fortnight, so I have 14 meals in the freezer and it all works out very nicely.”

Born in Sydney in 1930, Marjorie worked as a secretary before getting married at 23-years of age. “In those days, girls didn’t go to work when they left school or after they were married,” she says. “My husband wouldn’t agree to it that I would work after we get married. It just wasn’t done in the 1940s.” After raising two daughters and a son, Marjorie made the move to Port Macquarie 31 years-ago to be near her grandchildren and quickly made up for the years not working. She was approached several times by community members asking if she would help set up the telephone counselling service Lifeline locally. “I was on the phone from Darlinghurst for many years. I said no to two people who asked if I’d help and then the minister of the church came and I finally agreed to go to this meeting, but said I wasn’t going to join,” she says. “I came out of the meeting as secretary. That taught me a lesson – don’t go to meetings!” Marjorie was part of the original Steering Committee and was made secretary in 1988. The committee spent a lot of time fund raising, corresponding with different church bodies and recruiting trainers in order to establish a Lifeline Centre. One of their achievements was creating financial sustainability for Lifeline Mid Coast through the establishment of the Lifeline Mid Coast shops in Taree, Port Macquarie and Kempsey. The other was achieving Lifeline accreditation for the 13 11 14 service. Marjorie underwent Lifeline training to become a Telephone Crisis Supporter, and in 1989 she was named as one of the first group of Referral Officers.

Every morning, Marjorie would walk down to the beach for a 6.00am swim; a routine she treasured. “It’s a beautiful town and there are so many lovely beaches and places to go to,” she says. “Lots of tourists come here so there’s a lot of activity going on all the time.” While these days there is less ocean swimming on the cards, Marjorie says she still likes to “go with the flow.” She loves the interaction she has with the HNG staff and says she’d recommend the service to everyone. “I’m very pleased with them,” she says. “Having them visit really breaks up the day.”