At a spritely 103, Keith Dawson is the oldest man in Port Macquarie. He caught up with Home Nursing Group to tell us about family, adventure, and the secret to a happy life. 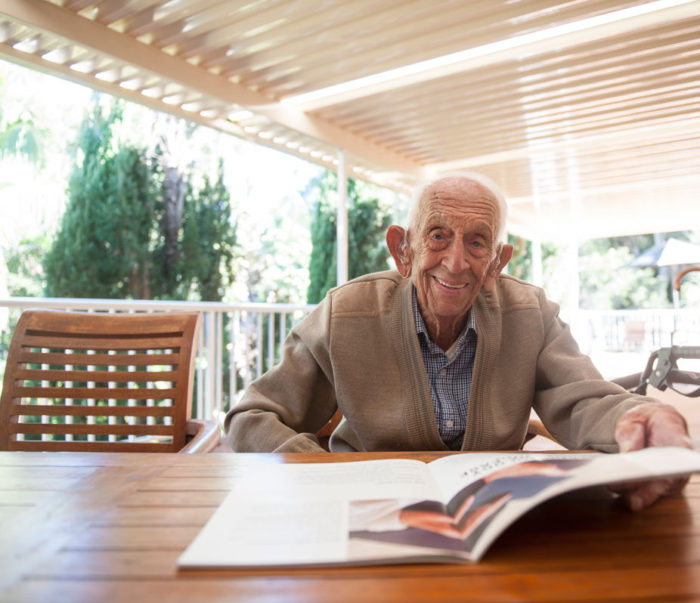 I’ve lived a good life. I moved around a fair bit, when I was younger. I was born in New Zealand, then came over here in the middle of winter with a mate, fighting against forty foot waves. Some of the roughest water in the world, between here and New Zealand, but we made it.

We didn’t stay put, though! My friend and I decided to get a ship from Australia back overseas, but we weren’t having any success… so we ordered a tandem push bike instead! We didn’t have any camping equipment; we slept on the ground, and travelled as far as Macksville before the front wheel collapsed. We got to Queensland eventually, and stayed there for a few months before we decided to go back to New Zealand.

Then I met up with another friend, and we decided to buy a boat. We worked in a wool store for about six months, until we could buy the boat between us. Roxane, I think she was called. That was in 1937, when we travelled over to Sydney; I don’t think many people out there would’ve sailed that far in a boat that size!

Eventually, we wound up in Sydney Harbour, where I met these two chaps who took me out to a club. While we were there, I met a lady, had a dance… and she became my wife. Betty. That dance was the best thing I ever did! Seventy-three years of marriage… it’s not bad, is it?

She was a beautiful wife, a beautiful lady. And we had a beautiful family together. That’s important for a happy life, I think — to get on with your family. You’ve got to do right by your family. I have my three daughters, Denise, Ann and Kathleen. And I’ve got eight grandchildren, and eight great-grandchildren.

I wrote a book for them. My life story; I wrote that from memory. It’s not published for the public, it’s published for the family. It kept me busy, which I needed. I like to be occupied. When I retired in 1971, I knew I wanted to keep being independent. I love gardening, and helping out my neighbours. I like to get out, meet people, talk with them. I go out every day, usually to the beach. I like to sit on the beachfront and watch the surf. I couldn’t imagine anything else. And I belong to the Seniors Club, so I visit them on the first Tuesday of the month. I attended a party with them just recently; they said, “Come along or else!” So I guess I’m a wanted man!

But that’s important, too. Getting out, I mean. You’ve got to get out amongst it all. You have to enjoy life. Have a laugh. If you can’t have a laugh, what are you doing? It’s the best sort of medicine.